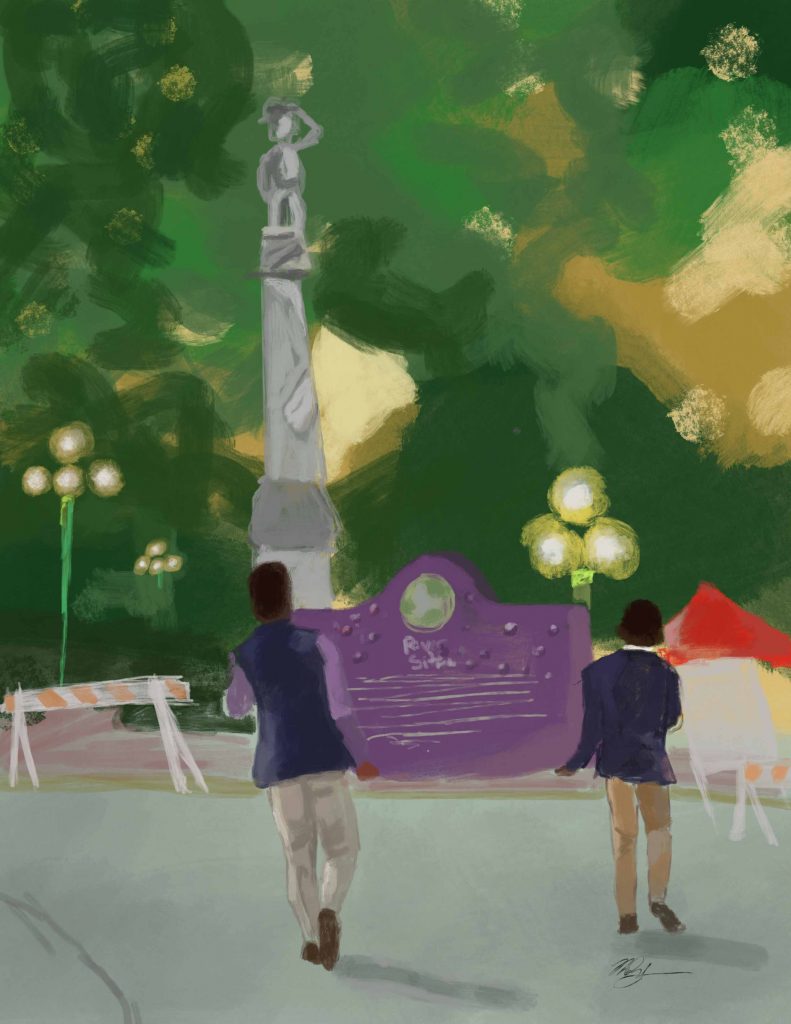 The walk from Nutt Auditorium to the Circle isn’t long. It’s not more than a few hundred steps, but the sign, a memorial for Emmett Till, was heavy. This sign, like the two before it, had been vandalized — this time with bullet holes distinct enough for the sharpened metal to leave Curtis Hill’s hand bleeding.

Hill, alongside Tyler Yarbrough, carried the memorial sign to briefly rest in front of the Confederate monument in the Circle on Oct. 20. The two African American students made the short, meaningful walk as a symbolic gesture. They said that they wanted to signal that change has occurred, but progress is slow.

“I think the idea behind taking it to the statue comes from a couple things,” Hill said. “It comes from the state of Mississippi politics right now, and how Confederate monuments and Confederate statues and the Confederacy (are) maybe being over-highlighted at this point.”

The Emmett Till Legacy Alliance worked with the Emmett Till Interpretive Center in Sumner to bring the vandalized memorial to campus. The marker was put on display in Bryant Hall, and the Legacy Alliance hosted a student panel discussion about Emmett Till’s legacy and the impact that a photo of students holding guns in front of the vandalized memorial had on them along with a panel of people working in Tallahatchie County to preserve Till’s memory.

The bullet-riddled sign now rests back at the interpretive center in Sumner, the location of Till’s murder and his murderers’ exoneration.

Hill, Yarborough, Yasmine Malone and founder of the legacy alliance on campus Isabel Spafford, spoke on the student panel. Hill, Yarborough and Malone are all African American students from the Delta, and they spoke about how racial tensions in the area have followed them to the university.

“James Meredith gets a statue outside the Lyceum, right in front of the bus stop area, but the Confederate statue gets to be posted in the middle of our campus,” Malone said. “It’s huge, and it’s in the middle of our campus. Students don’t have to walk past James Meredith, and if I don’t remember to glance over, I don’t even see (it), but I can’t avoid the Confederate statue.”

Yarborough saw his experience growing up in the Delta was mirrored at the university as well. He compared the legacy of civil rights leader Vera Pigee being overshadowed in his hometown of Clarksdale to Meredith’s legacy at the university.

Pigee worked to integrate the public transportation system in Clarksdale, and the bus station that she helped integrate will soon be turned into a Wingstop.

“There’s so much history in the Delta that’s just locked away that people don’t know about,” Yarborough said.

A mural of Pigee was recently painted in Clarksdale, and Yarborough hopes that bringing more attention to her legacy will shine a light on how the history of the civil rights movement affected the area.

“One big thing that I talk about is love for your community, and in a place like the Delta, it’s so easy not to love where you live or understand the history in your town, and it makes you want to just go and leave,” Yarborough said.

“We can clearly look at (the outcome of the Emmett Till case) and say, ‘That’s wrong,’ but that’s an institution of our society that governs the way we administer our justice,” Yarborough said. “So when we look at the Confederate statue, we see that this same symbolism of white supremacy is embedded within that statue ,too, and how it, for years, has been used as a rallying point to, I guess, maintain white supremacy.”

The university put out several statements condemning the vandalism after a photo surfaced on Instagram in July of Kappa Alpha fraternity members standing in front of the vandalized Emmett Till memorial.

The university admitted that it had learned of the photo in March through its Bias Incident Response Team system, but because of communication errors between university groups, there was no action for months.

Provost Noel Wilkin and Vice Chancellor for Diversity and Community Engagement Katrina Caldwell committed to diversity training for all students going through the Greek recruitment process at the Provost forum in September.

“I applaud them for doing that … but (I) also can’t give the university slack when they don’t turn in paperwork to get the statue moved, so we also have to call them out when they do stuff like that,” Yarborough said.

Currently, the statue’s fate rests in the hands of the Mississippi Department of Archives and History (MDAH). On Aug. 27, the university sent its plans for relocation to the MDAH, over five months after student groups voted for the monument to be relocated. If the plans are approved by the MDAH at their December meeting, the monument’s relocation will be placed as an agenda item for the Institutions of Higher Learning to make the final decision.

After the photo surfaced, there were many conversations on campus of whether the students in the picture would be held accountable by the university based on the standards of the University Creed. The university has said that, while the students were in violation of the Creed, the Creed is not actionable as it stands. Wilkin said that the university would bring in speakers over the next year to talk about the actionability of the Creed at the Provost Forum.

Hill said he thinks the university should change its policy concerning the Creed’s actionability.

“When it comes to things like academic dishonesty, professors can refer back to the Creed, and there are certain actions they can take against you,” Hill said. “Of course, if you plagiarize, that goes against the Creed and maybe a lot of university policies. In that same vein, students can still be held responsible to the extent that it will be something that goes beyond community service hours.”

The students from the panel hope that these conversations will help define a shared history for the community.

“I just hope that by the time we leave, or sometime after, we can come to a point where we decide in our collective history,” Malone said. “We no longer want to have the separation between the masses that live here.”